The Douglas Fir Christmas tree is the second most common Christmas tree in the Western United States, grown in western Oregon and Washington. Douglas fir grows relatively fast compared to other varieties a 5-8 tree can be grown in 6-9 years.The Douglas Fir is a very full and bushy tree, the branches are a lot weaker then the noble fir but it has short green needles, and has a strong fragrance, it is a cheap alternative to a noble fir. We carry douglas firs that range in height from 4-11 feet.

The four types of trees listed above are our main types that we carry every year, but on occasion we carry, Shasta Red Fir, Scotch Pine, Balasm Fir, Fraser Fir, Turkish Fir and Korean Fir. 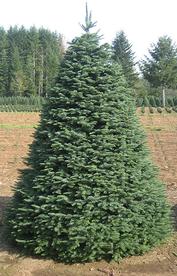 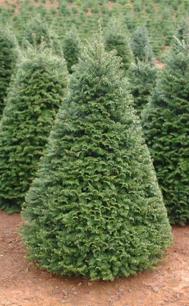 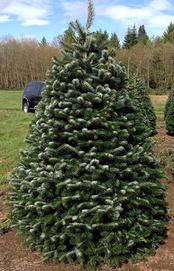 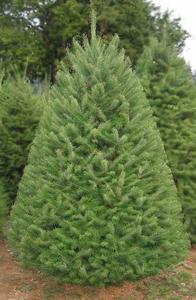 Grand Firs are popular across the western United States and can be found growing, like most Christmas trees in western Oregon and Washington. Grand firs are similar to douglas fir in shape, they are very full and bushy their needles are very unique in that the when you look down on the needles they are dark green but when you look up from the underside they have much more of a bluish tint. But what really set these trees apart is their strong sweet smell, it is by far the best smelling christmas tree that we carry. They are difficult to grow and are very prone to disease, a typical 5-8 tree can be grown in 7-9 years. They run in price a little bit more in price then a douglas fir but also a little less then a noble. We carry Grand firs in height from 4-16 feet, and on occasion we carry natural Grand Firs as well.

Nordman fir trees are native to the mountains of the Black Sea, and have become increasingly popular in the Pacific Northwest for Christmas Trees in the last ten years. Multiple tree farms are currently attempting to grow them and finding that they are a very slow growing tree, and because of that the price can run 10-20% more then a nobble. They are very similar to a noble with the main differences being they have much more of a waxy shine to them and silver tips on the ends of the branches. They are extremely good at holding their needles through the Christmas season with little mess to clean up in the house. We carry Nordmans in heights from 4-10 feet.

The Noble Fir is the most common Christmas tree in the western United States. They grow best at higher elevations, of northwestern California as well as western Oregon and Washington.  They typically take  7-10 years to reach a height of 5-8 feet. The Noble Fir Christmas tree is known for thick sturdy branches, with slightly prickly needles and a slight blueish tint.

We sell all types of nobles ranging from 2-20 feet tall. Our Nobles vary in every different shape and size, we carry them from full and bushy, to natural and very open you can see all the way through them.